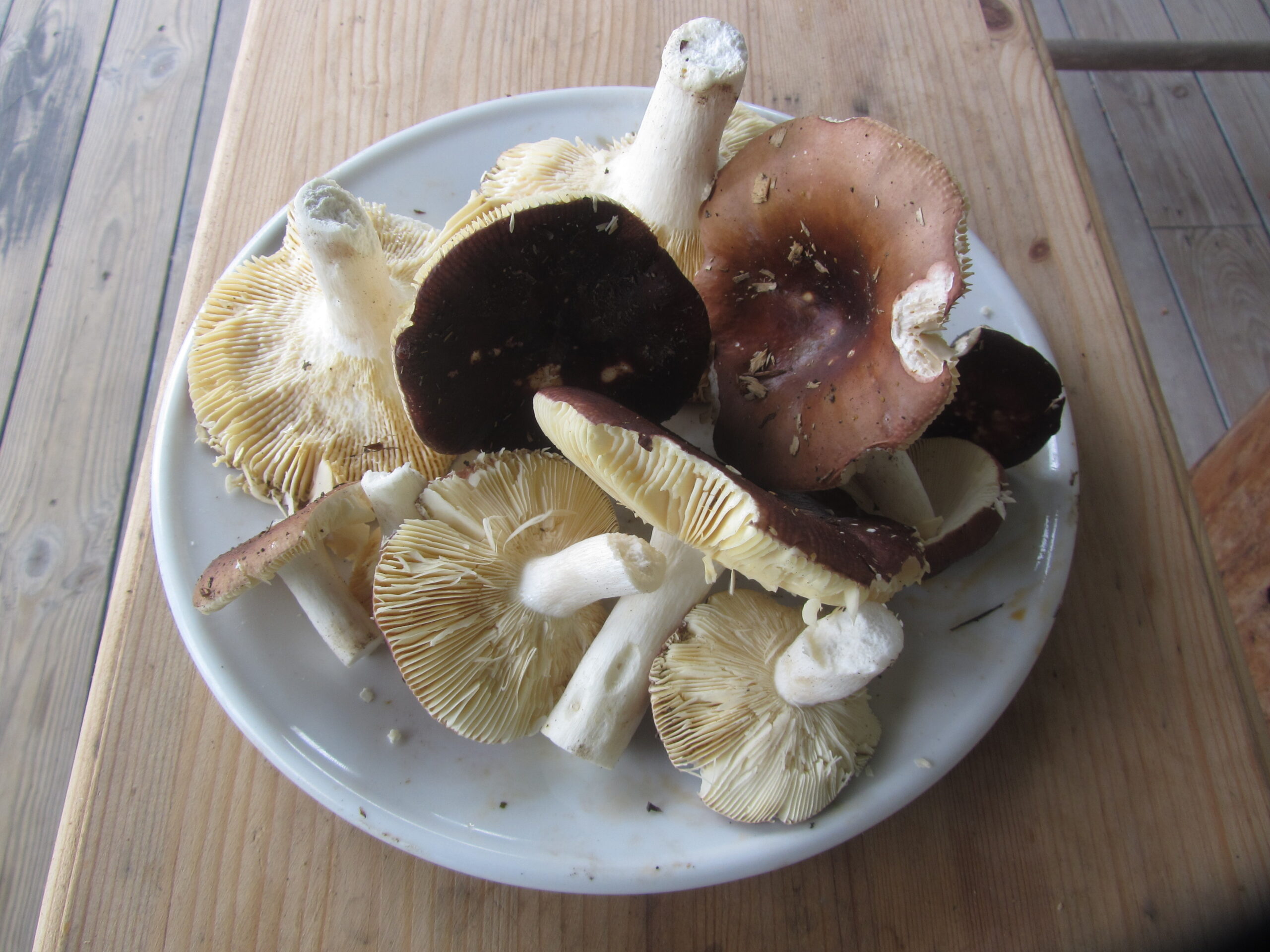 WHEN IT COMES TO MUSHROOMS, I have at some point long ago decided to only pick chanterelles as an edible mushroom. Boletusand other mushrooms I leave there. I have bad experience of trying myself out and most of it is either a disgusting texture or bad taste. I tried lemon yellow mucus for a year, I will not do it again, nor will cauliflower mushrooms be more on my dining table, it tastes cozy, as my niece put it.

But this year everything was different. My brother went on a mushroom course and I went out into the woods and learned a lot of inedible mushrooms, as well as a lot of edibles.
At home on the plot, quite a few purple-colored fungi grow with slices on the underside. I found out it must be RUSSULA INTEGRA. You know that it is a Russula by breaking off the foot, it is only Russulas that give a crime without thread. It is therefore known that it is not a toxic Kremlin because there are no toxic Kremlins. However, there are, e.g. pepper cream that tastes strong and bad. The pepper russula is excluded by tasting it… So it tastes mild and almond, then it is probably an almond cream.
Well, so I gathered some almond crumbs and fried in the usual way in the cast iron pan. They got a good texture and the taste was really excellent. Mild, but still with a certain taste of almonds perhaps? Really good actually. Very good I must say. It is one of the best edible mushrooms I have ever tried and it is interesting because the Russula integra is quite common in our forests and immediate surroundings.
Now the Russula integra has sorted itself among my favorites when it comes to edible mushrooms. I otherwise have plenty of Grynsopp in the local area as well, which also became a new discovery on a delicatessen mushroom and that a few years ago.
So here in the beginning of September, there will be a little mushroom picking almost every day on the site and within the next few hundred meters. Can it get better?
Taking away the fruits of nature means that you become a bit of a hunter and gatherer. It costs nothing to go out, you have not sown or planted anything, so it is about looking for and taking advantage of what is available from nature's production. It is sustainability and Swedes should, or rather MUST, start using this part of the free food supply that exists in the immediate area if we are to be able to survive on this planet.
Work is really a dance. It will be a nice walk in the surroundings and the search is always a bit exciting, because I never really know where they grow, even if there are places where there are usually more. It is much more exciting and satisfying than picking mushrooms in the grocery store!

When the Russula integra is collected, it is cleaned on the stairs in the afternoon sun, also part of a wonderful presence with the elements of a sustainable lifestyle.
Finally, I cut the mushrooms into reasonably large pieces and put them in the cast iron pan. First the water is boiled away and it is then necessary to scrape with a spoon in the bottom of the pan all the time so that it does not burn. I actually usually cheat and put in a large dollop of margarine even before the water has boiled away, otherwise you wait with it until it is completely dry in the pan.
Mushrooms can withstand and are best handled fairly tightly, so it is fried on high heat and until it starts to get color and above all has shrunk down to a firmer consistency when the water has boiled away.

The spice of mushrooms is always coarse salt and black pepper for me. The mushroom tolerates quite a lot of spices.

Now it becomes Russula integra several times a week and what is left over goes in the freezer after frying and is stored for the winter needs.

A Blog about Sustainability

You wil get a monthly notifictation about new posts and publications.